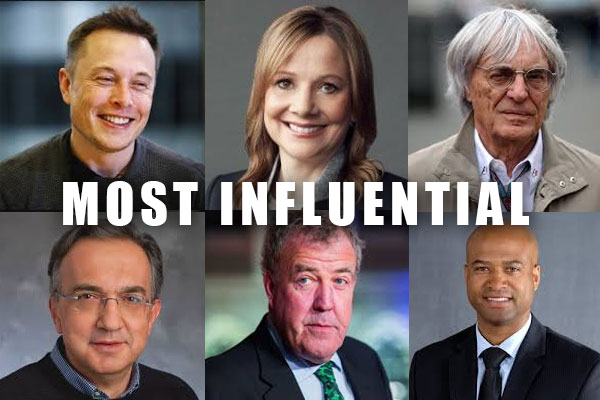 One of these individuals is Elon Musk. Elon is currently ranked on the Forbes list of “The World’s Most Powerful People” as #21. And if that is not impressive enough…the man’s net worth is over $20.9 billion which makes him one of the wealthiest people in the world. How did he accomplish such ratings and wealth and what does he have to do with the auto industry? Musk was born in South Africa in 1971 and is the CEO, co-founder and “product architect” of Tesla Inc. Based in Palo Alto, CA, Tesla Inc. specializes in lithium-ion battery energy storage and electric cars. One thing is for sure, of all the company’s Musk owns or is a part of, the future of these companies and this relentless business man is very bright indeed. Another influential individual in the auto industry is General Motors Company Chairman and CEO, Mary Barra. Born in 1961 in Michigan, Barra has been front and center through the ignition recall GM experienced. And this recall was a major one--to the tune of 84 safety recalls on over 30 million cars. With such a huge recall fiasco, Barra was called to testify before the Senate, which really threw her into the public eye. Being the first female CEO of an automaker, Barra stands out. And handling a recall snafu that large, well that also makes her a person those in the auto industry had better be familiar with. Bernie Ecclestone. When you hear his name, you think Formula One Group, of which he was the former CEO. Born in 1930, this British business man is a strong influencer on business decisions regarding F1, and since racing is oftentimes used for testing, could change the automotive industry as we know it. Ecclestone used to be a competitor in auto racing and then was a manager of drivers. He truly began his involvement with motors after World War II when he went into business trading spare motorcycle parts. Born in 1952 in Italy, Sergio Marchionne is arguably one of the most influential people in the automotive industry. His credentials include being the chairman and CEO of Ferrari and Maserati. He has the reputation for taking companies and fostering substantial growth. This is precisely what he did with Flat Group by forming an alliance with Chrysler which is now the 7th largest auto manufacturer in the world. Now those are some bragging rights! Now who’s to say that all influential folks in the auto industry must be CEOs and business men? Jeremy Clarkson has certainly left his mark as an automotive journalist. Born in 1960, this British journalist specializes in all things cars and motor. He played a huge role in Top Gear, a British TV series about motor vehicles. He is known for a very tongue-and-cheek writing style. Ralph Gilles is a name that also ranks high on the list of most influential folks in the auto industry. Born in 1970 in Haiti, Gilles was an auto designer who climbed the ranks to become an executive. He was the President and CEO of Chrysler’s SRT brand but was then promoted to Head of Designer for Fiat Chrysler in 2015. Gilles also was featured on Abstract: The Art of Design, a Netflix docu-series. Gilles is down to earth but known as a risk taker in the business. So far, the risks seem worth taking!